Uranquinty Folk Festival is a small, family-orientated festival, 12 kilometres south of Wagga Wagga southern NSW. Formed in 1970 by the Wagga Wagga Folk society it is one of Australias oldest folk festivals.

The brand new community hall, on the camping oval, is a huge asset for the festival. Features a kitchen, loos, showers and good-sized hall with great acoustics.
In our 7 years, we (that is, Spirit of the Glen) have played gigs in pubs, clubs, cafes, wineries, restaurants, celtic festivals, churches, conventions, celebrations, pavements and paddocks. But never a folk festival.

So, under the circumstances and being so far from home (it's a thirteen hour drive), unsure of what to expect and plagued by questions like "what's it like playing to an audience who are actually paying attention?", or "what if we forget all the lyrics?", or worst of all "what if they hate us?", we arrived a full 24 hours early to get time to rest, acclimatise and fit in some last-minute practice.

Shortly after arrival, tent-pitching (during which an astonishing number of people said hello to us and made us feel welcome), and a tasty meal at the pub, we enjoyed a wonderful session in Jack's hut at the camping oval (actually the tennis clubhouse, "Jack's" is an important and convenient venue for sessions, workshops and practice), feeling very welcomed by the dozen or so similarly early arrivals already in the circle - some had instruments, some didnt, all were enjoying themselves. 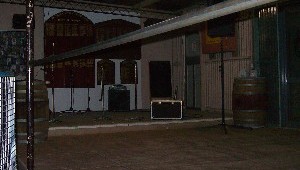 The stage and dance floor in the back of the Quinty pub.
The following day, after exploring Quinty and Wagga, we survived our first "trial by fire" set on friday night at the pub. The first official festival gig, this was a "meet and greet" event with much excited, high-energy chatter. Our set was even punctuated by interruptions for the loudest meat raffle I've ever heard. This is what we are used to and were glad to have put together a rowdy set which didnt require any audience concentration!

Soon after that and watching the talented, captivating and endearing "Stiff Gins" and, since it was raining, we headed back to Jack's whereupon, finding it empty, we started to practice for the more scary gig the following night. The one where people might actually be paying attention! Practice soon turned into performance however as more and more people started to arrive and watch over the next couple of hours.

Eventually, gradually and thankfully more and more musicians came in also and started to take turns, sometimes as solos, sometimes as free-for-alls. It is in the nature of a session to be unplanned, structureless and fluid. People, musicians, singers and spectators come and go without formality. It was a lovely evening which went way into the wee small hours of the night. The "will we fit in?" question having vanished long ago. We were amongst friends. 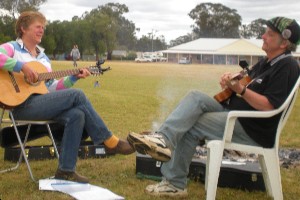 Some quiet practice time around the still glowing embers of last night's campfire. The oval and hall in the background.
It was the end of our "dinner set" on the following (saturday) night in the shiny new community hall, conveniently located at the camping oval and nicknamed "the Palias de la Joie" - a typographical error (it was intended to be "Palais") which appears to have stuck and which, I'm pretty sure, means "the straw mattress of pleasure"!

Now, I must mention, this literally brand-new building resplendent with ample showers, hot and cold running water and loos, had a quality which surprised almost everybody. The acoustics. They are stunning. Absolutely superb. Brilliant and unexpected. In an earlier practice, we had sung one sentence then stopped and said to each other: "bloody hell!".

We had thoroughly enjoyed our first 40minutes on stage for the dinner set, and had been given every reason to think that at least a significant majority of the people filling all the tables there were having fun too. Feet had been tapping, hands had been held fondly by couples both young and less so, snuggles had been snuggled, and mouths, inbetween munching the fabulous food which included a beautiful lamb curry, had frequently been seen moving in synch with ours. The applause (a phenomenon rarely encountered in most of our normal venues) seemed genuine. 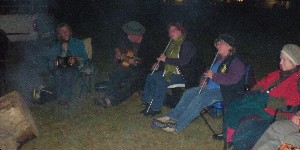 "The Badja River Quartet" - an impossibly good "scratch" band - enjoying the campfire.
It was now dark outside and the house lights had just been turned off. From the stage, we could no longer see the audience, which we knew to be comprised of smiling, well-fed, friendly, folkie faces. We could see, from behind the glare of the spotlights, only the twinkling of the many tea-light candles strategically placed on flat surfaces everywhere.

Our self-proclaimed "MC-Goddess", a lovely lady and one of a rapidly-growing band of brand-new life-long friends, "Lainey", a Badja River Quartet (they were awesome!) member and "Mother of Intention", had spoken earlier of a "diamond-studded doona" in reference to a different event and, gazing at the sea of twinkling lights now before us, I wondered if this was perhaps the inspiration for that evergreen campfire favourite - "The diamondoona drover"! )

As our finale for this set, we played "Poison Train", a beautiful and moving song by Michael O'Rourke about a town which used to have a railway. It is particularly poignant to us living as we do in Glen Innes, a town with thousands of trucks rattling through on our intersecting highways yet with rusty, unused railway lines and crumbling platforms and sheds bearing witness to some monumentally stupid decisions. And so, we have put a fair amount of effort into trying to do this worthy song justice. It has become a special favourite of ours and this was the first time we had performed it in public.

A kick-ass campfire session requires kick-ass logs!
At the end of the first verse (there are plenty!) from out of the darkness, and with no prompting at all, what sounded like a 100 voice, professional choir who unknown to us had been rehearsing especially for this event, joined in, complete with a multitude of rich harmonies covering the full aural spectrum, from way up there to way down there, to support us in the chorus.

I say "support" deliberately. As Spirit of the Glen, we are quite used to fighting against a background noise of chatter, televisions, tannoy announcements, shouting competitions from diners, drinkers, drunks and self-important loud-talkers, chook raffles and even passing bagpipe bands! A pub crowd, often with a gusto and enthusiasm untempered by talent or any interest in the lyrics, pitch or musical sensitivity, will sometimes join in. Don't get me wrong, that can be nice too. 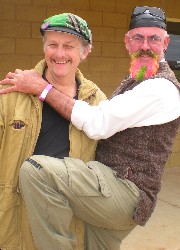 Col and the (ever camera-shy) "Feral" share a "special moment"!
But no, this was a support which followed us, sensitive to and carefully acknowledging our tempo and volume directions, emphasising, strengthening, enriching and embracing the sense of the moment but not taking over.

I had of course experienced this sort of "special moment" many, many times at folk clubs and festivals in the past as a spectator, and they can be very moving and that's why we all love to join in. But the, previously undreamt of, strength of the experience from the performer's perspective caught me completely unawares. This was different. Extra special. Nothing had prepared me for the almost-overwhelming sensation.

By the end of the song I had quite literally and, working from north to south, a tear in my eye (although this was probably just an irritation from something manly like a piece of grit), a lump in my throat, shivers up my spine, goosebumps and weak knees! A quick glance at my singing partner, Skye, confirmed I wasn't alone in sensing this. It was just the most brilliant thing. I can still feel the adrenaline.

But this was not the end of it. This unbelievable moment was to be repeated the next night but in daylight, unamplified and, being much closer to the audience, I could see that more than one of them also seemed afflicted by "dust" in an eye!

Campfire sessions at Quinty are very special events.
In a weekend of highlights too numerous to mention them all, Spirit of the Glen sharing the stage for a joint performance of "Caledonia" with our good friends, Col, Eddie and Marc from "Braemar" (who had just performed their outstanding "Lochabar no more") was an experience I will not soon forget. This magical moment was conceived and engineered by another of our new best friends.

Known only as "Feral", he deserves to be the topic of a completely separate discourse but, suffice to say, we are thrilled to know someone called "Feral" and even more delighted and relieved to have him on our side. We slept better knowing this man of many talents was around!

Perfect days at Quinty 2009 were rounded off perfectly by perfect nights. The campfire sessions at Quinty need to be experienced to be believed. Start with a kick-ass log, one which will burn gently and evenly all night with almost no smoke. Then, put a truck load of the best musicians and singers you will find anywhere around that campfire and let them get on with it. Sit down, relax and enjoy. Participate or don't, it doesn't matter, nobody is out of place.

We felt thrilled, delighted and honoured to have been asked to contribute our offerings to this memorable event, and enjoyed it immensely from "go" to "whoa". The quality of the acts and the warmth and friendship displayed by everybody there make it a special thing.

Everybody is a friend at Quinty.
Alan Hunter, his family and friends cannot be congratulated enough for the work they put into getting the new hall, showers and loos up and running in time for the festival and in running this important and enjoyable festival.

To Alan and all our new friends, thank you so much, we had a blast and look forward to seeing you all again.

Damn, I seem to have dust in my eye again!

"Oh Col, that was the most moving thing I have ever read about Quinty, or just about anything, you just threw a big bucket of dust in my eye! It is beautiful. Reading that makes it all worthwhile. I am so proud and happy, it's what every festival organiser worth her/his salt would love to read. And I don't have to write a review now. Phew!"