"Spirit of the Glen do the Australian Celtic Festival  again. "

A review of the 19th Australian Celtic Festival, Glen Innes, 2010.
by Col Pike on behalf of Spirit of the Glen 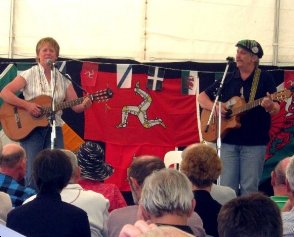 The 19th annual Australian Celtic Festival, Glen Innes, Mayday weekend. Every year it gets better. This year was probably the most fun wed had in our 7 years playing at the festival.

Last year was great because we won the festivals Triquetra Amabassador award (thats a whole different story) but will go down in our memories as bagpipe-hell year. Happily this year, new bagpipe-control measures were put in place: bins had been cleared, officials were vigilant for breakouts under the tables, nearby shrubberies, behind rocks etc. No bands marching past your stage or through the acoustic sets. Peace. Civilised. But I digress.

Friday lunchtime. We were to kick things off with a set on the main street, outside the town hall. Official opening. Impressed. Fortunately our set included a lot of whistle and harmonica from because playing guitar with one foot on a chair isnt fun (Id forgotten to pack a guitar strap)! Good ½ hour, appreciative but incredibly long skinny audience: only 3 or 4 deep but stretching at least 100 yds in either direction!

Finishing there, we tripped around the corner to play an acoustic set outside the bakery and were blown away by the number of people who followed to hear more. That is the nicest feeling, because it really is a huge compliment when people give up their time to listen to you. After an hour of battling (rather well, if we do say so ourselves!) against traffic noise we were both getting warning signs from vocal chords and, recognising we had a long weekend ahead of us, decided that we would have to let our lovely audience go. It was tough, because by then we really wanted to keep them.

7pm  we provided music for a Celtic Service for our friends in the local 7th day Adventist Church. Lovely music, mostly tunes we already know but with different words.

8 30pm  Sorry cant stay - Gig at the local bowling club (restaurant and bar). We included a new song Id just written a couple of days earlier called Is it ok if I sing while you are talking! They loved it (we even got a standing ovationette) plus several other bookings for later in the year which is always a good sign! The sound guy was brilliant  we wanted to keep him too! Eventually, the audience agreed it was bedtime. Knackered, but great start to festival.

Saturday pm  ¼ hour set on the new, much-improved Ruby Stage up at the Standing Stones. Capacity audience despite competition from jousting up the hill and entertainment on other stages. We announced it as the Spirit of the Glen Sampler set, spoke really fast and had the best time as, to all appearances, did the audience. After some more singing at the Crofters Cottage, we played for 3 hours over dinner at the Railway Refreshment Rooms which still operates as a pub/restaurant. Alas, no trains anymore so Michael ORourkes poison train is always very poignant when sung there.

Great weekend but, as always, followed by a feeling of Im sure I should be doing something now!