We are thrilled to be able to announce our long awaited 3rd CD - "Still Standing".

It features music from a diverse range of sources from traditional gaelic to contemporary folk songs by Bob Dylan and Simon and Garfunkel and even The Rolling Stones, Jefferson Airplane and Jimi Hendrix - all given our own, special touch.

love,
Skye and Col
Spirit of the Glen 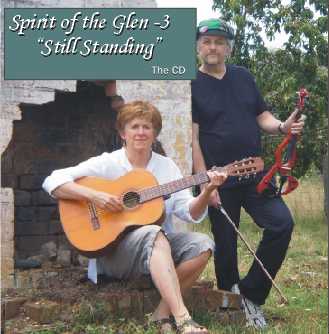 Tracklist: (Click to hear samples) (samples are about 30secs and much lower quality than our actual cd)

2. Little wing - Jimi Hendrix. Quite a few versions of this have been done, ranging from bluesy, to folksie and sometimes just plain weird. But we wanted something different. We aimed at "haunting" and the first person we played it to said it gave him goosebumps. Bingo!!

3. Lady Jane - Rolling Stones. Is this the most un-Rolling Stones song they ever wrote? Apparently they stopped playing it live after Brian Jones' death. It's rumoured to be about Henry 8th (or some of his wives) - I'm not convinced, but it's a great song.

4. Lighthouse - The Waifs. I love the Waifs and Skye does a great job with the vocals on this catchy little number.

5. Lonesome Boatman - the Fureys. Ok so the story here is that the Boatman used to be one of our stock numbers but then our whistler got the urge to exchange her whistle for a pile of mudbricks! So, having bought myself a shiny handmade "Dickson" and learned how to play the thing, Boatman is back! - this one's dedicated to Mausie

6. It ain't me babe - Bob Dylan It has been suggested that this was written as a parody of the Beatles' hit of the same era "She Loves You". I like that idea and it's a fun song to do.

7. Dimming of the day - Richard Thompson. Some have commented that our treatment of this wonderful song is a bit "country". I'd like to reiterate that we are "folkies" through and through and not even remotely "country". Not all all. Ever. Well, maybe a bit!

8. Yesterday - Paul McCartney. I seem to remember reading somewhere that this is one of the world's most recorded songs. Well one more can't hurt and we don't think there are many whistle, harmonica and guitar versions out there!

9. I'll be your baby - Bob Dylan Obviously written about/for a different lady than the one in "it aint me". Unless they came to some sort of compromise?

10. Water Lily. It's from a poem by Henry Lawson and is very sad.

11. White Rabbit - by Jefferson Airplane. This is a classic from the 70's. Think Alice in Wonderland meets Ravel's Bolero! Our tribute to the Amazing Grace (Slick) etc. (By the way, the doormouse never actually said "feed your head", they are separate references! )

12. Just let me say - by Geoff Bullock. One of our very good friends, the Rev Keith Jackson (he plays a mean flugel horn) taught us this great tune and we dedicate it to him and of course Julie and Kristie and all the other "Sevens" with heartfelt thanks for their friendship, support and encouragement.

13. The Boxer - Paul Simon. Paul Simon and Bob Dylan apparently both think it was written about them. I guess Paul would know.

14. The Briar and the Rose - Tom Waits. Apparently Tom wrote the song for a play called "The Black Rider" in 1993.

15. Advance - Peter Dodds McCormick/Col. (Well to be precise, Peter wrote the last verse and Col wrote the first three verses and counter melody). It goes back a few years when we were engaged to stand in a paddock all day and entertain the thronging masses. Being Australia Day and soon after a previous prime minister had tried unsuccessfully to introduce a preamble to the constitution, we felt moved to write a preamble to our National Anthem.

All vocals, instruments and arrangements on all tracks are by Spirit of the Glen 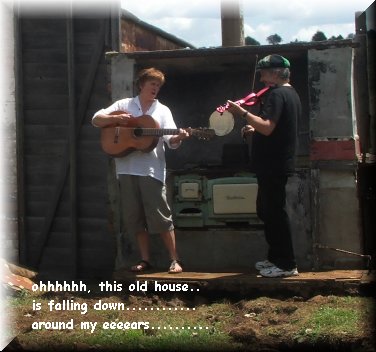 
How can I buy it? Easy. Press one of the "buy now" buttons on this site and you will be able to pay by credit card or paypal account. It's only $25 incl p&p!

If you don't like paypal or credit cards online just drop us a line and we'll sort something out that suits you!