Spirit of the Glen Pics
Click any photo for larger version: 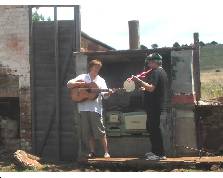 Spirit of the Glen 01
- Still Standing 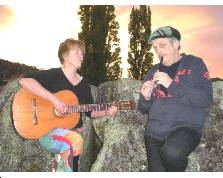 Spirit of the Glen 02
- at balancing rock 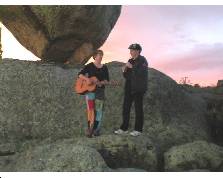 Spirit of the Glen 03
- at balancing rock 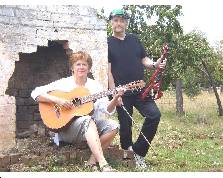 Spirit of the Glen 05
- Still Standing 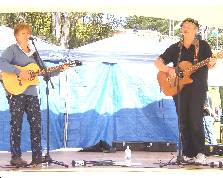 Spirit of the Glen (Col and Skye) bring great harmonies and a variety of instruments to an extensive repertoire of largely Folk and Celtic Music.

"Follow the Spirit" - Glen Innes based Skye McKenny and Col Pike share a life-long love of folk music and in 2002 came together to form Spirit of the Glen.

Spirit of the Glenbring great harmonies and a variety of instruments (nylon guitars, whistles, harmonica, fiddle and the occassional bangey thing) to their extensive repertoire which includes traditional, original, celtic and contempory folk songs and tunes as well as those of the folk revival era.

They also enjoy dragging in tunes from other less obvious sources, especially from the 60's and 70's, and applying their own treatments. The music of Eric Clapton, Jimi Hendrix, Jefferson Airplane and the Rolling Stones, to name just a few, has all suffered this fate as has that of AC/DC! This versatility is amply demonstrated on their 3rd CD "Still Standing" which was released in May 2009 (the name harks back to their first CD which was entitled "Standing Stones", named after the national monument at Glen Innes).

Spirit of the Glen appeal to young and old alike and they were Winners of The Australian Celtic Festival 2009 Triquetra Award.

A Medical Receptionist for 20 something years, Skye has raised 3 boys and about 6 years ago married local personality, pool-guy and, although slightly greying, all-round nice fellow, John. They love nothing more than to pack up the Nissan, esky, camper trailer and kayaks and head off to some stinking hot, foresaken swamp of a place infested by so many unpleasant critters and varmints that no-one in their right mind would want to vist!

Interestingly, wherever Skye goes, she meets people she knows! We have proven this many times. We've arrived at a gig in some far-flung place she has never visited, a bus will drive up and out will step a long lost friend. Or they're busy catching crabs and fighting off crocs and flies in their boat ("muddies with salties & blowies in the tinnie") when on the bank will appear an old school chum, or an aunt!

Skye, the much more tolerant, better-looking and all-round nicer person of the musical duo, sings and plays guitar.

Col has played guitar since 13 when his band "Spectre" played Shadows' covers at school dances. He has an Honours degree in Aeronautical Engineering from Bath University (chosen because it was the "prettiest" Uni) and amongst other things has been Network Manager for a building society, a Senior Public Servant and more recently a Senior Business Management Consultant. The sudden loss of an array of internal organs forced a change in lifestyle.

Now as a web designer, software developer, guitar teacher and part time folk singer he still earns as much, it just takes 10 times as long. Col is also a part-time nerd and although he has a number of skills upon which to draw, concedes that diplomacy is not one of them!

Married to his wife Annie since 1976, they have raised 2 girls of their own plus another who came to dinner and stayed for a few years. Their idea of a holiday involves somewhere with room service and absolutely no crocodiles - although they can tolerate a tent in a good cause, such as a folk festival.